Effectuation is a way of thinking and decision-making that is based on the idea that entrepreneurs create their future by taking action and making things happen. It is a way of thinking that is focused on creating opportunities and solving problems by using the resources that are available to you, rather than making predictions and trying to plan for the future.

Effectuation is an idea with a sense of purpose – a desire to improve the state of the world and the lives of individuals by enabling the creation of firms, products, markets, services, and ideas.

Effectual reasoning is a type of human problem solving developed from a cognitive science based study of 27 founders of companies ranging in size from $200M to $6.5B.

Effectuation articulates a dynamic and iterative process of creating new artifacts in the world. Effectual reasoning is a type of human problem solving that takes the future as fundamentally unpredictable, yet controllable through human action; the environment as constructible through choice; and goal as negotiated residuals of stakeholder commitments rather than as pre-existent preference orderings.

Effectuation is an idea born of a unique look at an age old problem – what makes entrepreneurs entrepreneurial? By the late 1990’s this question had been debated for decades by both academic researchers and practitioners of entrepreneurship with little success. The main focus of academic research had been on two theories: 1) that entrepreneurship either a genetic or acquired personality trait or psychological condition (risk seeking) and 2) that entrepreneurs took advantage of opportunities that were created by inefficient market forces, regulation, and scientific breakthroughs. Even if science had supported these theories, they were of no practical use to the entrepreneur who was starting his or her business.

Further, dozens of entrepreneurs publish memoirs and “how-to” books on entrepreneurship every year. These are based on the unique experiences of the individual entrepreneur (which is good) but aren’t a) backed up with science or b) universally applicable.

No one had gotten the truly unique characteristics, habits, and behaviors of the species entrepreneur. 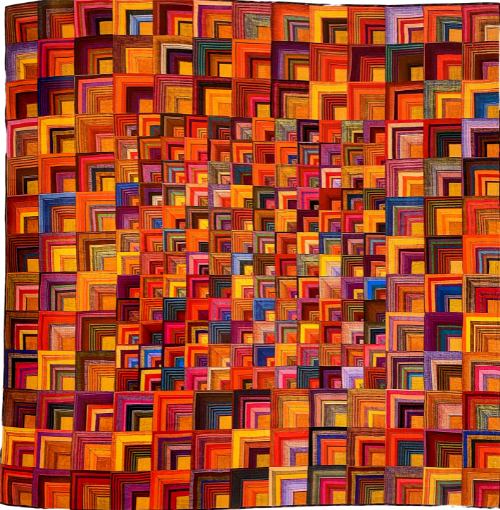 future happen, they don’t need to worry about predicting the future, determining perfect timing to start, or finding the optimal opportunity. Sarasvathy calls this “effectual logic” which sits opposed to “causal logic” taught to managers in more certain (or predictable) circumstances.

The focus is on achieving a desired goal through a specific set of given means. Causation invokes search and select tactics and under-lies most good management theories. Causal thinkers believe that “If I can predict the future, I can control it.”

The focus is on using a set of evolving means to achieve new and different goals. Effectuation evokes creative and transformative tactics. Effectual logic is the name given to heuristics used by expert entrepreneurs in new venture creation. Effectual thinkers believe that “If I can control the future, I do not need to predict it.”

Effectuation consists of a unique world view and 4 principles. These 5 elements are core to using the “effectual cycle” as a venture develops.

Bird in Hand Principle – Start with your means. Don’t wait for the perfect opportunity. Start taking action, based on what you have readily available: who you are, what you know, and who you know.

Affordable Loss Principle – Set affordable loss Evaluate opportunities based on whether the downside is acceptable, rather than on the attractiveness of the predicted upside.

Crazy-Quilt Principle – Form partnerships Form partnerships with people and organizations willing to make a real commitment to jointly creating the future—product, firm, market—with you. Don’t worry so much about competitive analysesand strategic planning.

Pilot in the Plane Principle. Control the controllable. The four specific principles above represent different ways entrepreneurs interact with the environment to shape the environment. Of course not everything can be shaped or controlled, but effectuation encourages you, as the pilot of your venture, to focus on those aspects of the environment which are, at least to a certain degree, within your control.

What is the effectual cycle?

Effectuation isn’t a static, one-time exercise. It is a logic and process that can be used as the firm develops in the “0-60mph” (early startup) phase of growth. Expert entrepreneurs follow the process to gain early customers and committed partners who then create new means and new goals as resources and viewpoints are added to the mix. Thus, instead of having a stated goal and finding means to reach it, expert entrepreneurs use the new means and new goals to drive the creation of the venture in ways they hadn’t expected, leveraging surprises as they present themselves. Effectuators use the process to lower the risk of the venture (by getting customers and income early, setting affordable loss, and spreading risk to others) and finding truly new and useful market opportunities by leveraging constraints and new information. 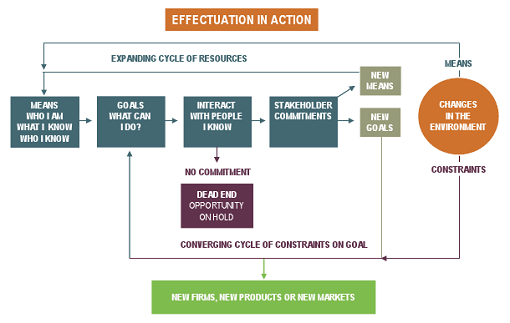 Sarasvathy didn’t create a “theory” of entrepreneurship that would be pitted against other theories. She documented a logic of entrepreneurial action that has methodical implications for both researchers and entrepreneurs. Effectuation research immediately produced two large outcomes:

1) Effectuation doesn’t merely explain historical methods of performance, effectuation is a method that anyone can learn and use to decrease the risk of starting a venture, “fail” more effectively, use fewer resources, and become “expert” in entrepreneurship more quickly

2) Effectuation is part of an “Entrepreneurial Method” (similar to the Scientific Method) whereby “effectual logic” can be used as the fuel to create more effective “experiments” by entrepreneurs testing their theories in the real world.

Effectuation is an idea born of a unique look at an age old problem – what makes entrepreneurs entrepreneurial? By the late 1990’s this question had been debated for decades by both practitioners of entrepreneurship and the academics that study them with little success. No one had gotten the truly unique characteristics, habits, and behaviors of the species entrepreneur.

Saras Sarasvathy, under the mentorship of Nobel Laureate Herbert Simon of Carnegie Mellon University, sought to provide “valid microfoundations for an economics in which Schumpeterian perspectives on innovation, competition, and growth are integral, yet consistent with recent evidence from evolutionary economics on the dynamics of markets and industries as well as with recent developments in behavioral economics on human decision-making.” The empirical evidence for the microfoundation came from a cognitive science based study of entrepreneurial expertise using think-aloud protocols. She had two main questions in her research:

“What commonalities and differences exist in the decision-making process of an group of expert entrepreneurs who started with the same idea for a new venture and face exactly the same set of decisions in building it?”

“In the face of non-existent or not-yet-existent markets, what underlying beliefs about the predictability of the future influence the decisions expert entrepreneurs make as they build a new venture?”

Sarasvathy had 27 expert entrepreneurs (entrepreneurs with over 15 years of experience as such who had founded multiple ventures including both successes and failures and had taken at least one company public [ranging in market capitalization of $250M – $6.5B]) work through a 17-page problem set of 10 typical questions encountered by entrepreneurs as they build a venture. They were asked to think aloud for the entire test period. All of their responses were taped, transcribed, and analyzed by Dr. Sarasvathy and a team of researchers. The responses were coded according to their causal and/or effectual logic (each of the principles above were highlighted). Sarasvathy found that 65% of the respondents used effectual logic 75% of the time when they were solving the problems. From this empirical basis, she learned that 1) expert entrepreneurs do share a common logic in solving entrepreneurial problems and 2) causal thinking is not bad, but required to form a venture. It was the timing and amount of effectuation reasoning that separated expert entrepreneurs. Especially at the early stages, expert entrepreneurs preferred to use effectual logic in creating new opportunities.

Where to from here?

In the late 1990s, when Saras Sarasvathy first described the decision-making approach that she had documented among a sample of successful entrepreneurs, she could not have predicted how her work would help shape the relatively young field of entrepreneurship research.

Since then, effectuation has become a respected field in the business academy and a compelling topic of interest in MBAclassrooms. The tight core of scholars dedicated to exploring the phenomenon of effectual reasoning—Sarasvathy, Nicholas Dew, Stuart Read, Robert Wiltbank, and Darden’s S. Venkataraman, among them—has grown into a global community. Currently dozens of researchers from all over the world are studying different elements of the entrepreneurial method, validating the research, and applying effectual thinking from corporate intra-preneurship to creating the next generation of social enterprises.

The global community of effectuation research is housed at Effectuation.org and by SEA – The Society For Entrepreneurial Action.

The following technical notes are useful as both a primer for effectuation and put to work in the classroom during a full entrepreneurship course on effectuation.